After interviewing Dr. Rose Booze in December, the thought of cleanly and clearly describing all of her accomplishments and interesting background was daunting. On paper and in person she conveys a history of passion and success in studying neurodevelopmental disorders, and it is exciting to get to share some of that history here. 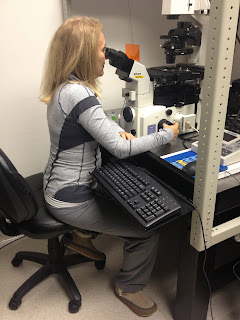 Dr. Booze described gaining her initial biological perspective, scientific curiosity, and general grit while growing up in rural Oregon on a sheep farm. She went to a 200-child, 2-room school house from kindergarten to 8th grade, and sold cows to pay for her undergraduate education at Oregon State University. As a burgeoning young scientist, she worked for Libby’s, a cannery where she ran the machine that mixed the peas and carrots. Of this she said “I know there’s cans out there that had only peas and only carrots!”… I’m sure the consumers of her unexpectedly monochrome cans of food would think their sacrifice in preserving her mental energies was worth it.

From OSU, Dr. Booze obtained a dual degree in zoology and psychology, and then went to work for a lab for the Environmental Protection Agency in Corvalis. This work experience first sparked her conscious interest in science, and specifically in toxicology and the effects of pesticides. About this she said, “Well I always loved the brain, and so then I asked ‘what do I do?’” Her trusted mentors suggested that she pursue the study of neurotoxicology; she applied to graduate school and got into a number of programs, but ended up taking a less traditional path to admission whereby Johns Hopkins University actually pursued her and requested that she apply and accept their admission offer to their Neurobiology program [she did]. Interesting side-note: She had never been to the east coast before and intended to visit the campus before accepting the offer, but Mount St. Helens erupted and foiled those plans! Thus, Dr. Booze moved from Corvalis, Oregon to inner city Baltimore without ever having met the people or city she was to work with. If you’re wondering when Dr. Charlie Mactutus factors in, this is it. She met Charlie on her first day of graduate school when he came in to talk to the graduate students as a post doctoral fellow. “I thought who is this guy? I don’t understand a word he’s saying... he was a New Yorker and he talked really fast and was talking about an unfamiliar area… he was talking about neurochemistry…”

During graduate school, Dr. Booze worked with David Olton, a scientist who was so influential that the Johns Hopkins program in behavioral biology is named for him (http://krieger.jhu.edu/behavioralbiology/about/). Dr. Olton invented the radial arm maze for rats, which I have not had the pleasure of using but hear is very important. Dr. Booze said that she really enjoyed graduate school, and this was certainly evident by the way that she talked about it. She then went on to do her post doctoral fellowship at Duke University in Neuropharmacology and published the first paper that mapped the receptors of the neuroadrenergic part of the brain, as well as 6 more papers after that (and in the middle of all of this she married Charlie). She then accepted her first faculty position at Wake Forest University as an Assistant Professor of Physiology and Pharmacology, and in 1991 she went to the University of Kentucky where she rose through the ranks to Full Professor, and had her two sons with Charlie.

The Booze-Mactutus family moved to Columbia in 2002 (and I’m pretty sure I heard them talking about boxes that they still hadn’t unpacked as recently as 2010) to accept positions in, you guessed it, the Department of Psychology. She also holds an adjunct appointment as Professor of Pharmacology, Physiology, and Neuroscience in the USC School of Medicine, and served as the interim Vice President for Research for a few years around 2010, after initially serving as Associate Vice President of Research. She reported these dual roles to be “very intense”, include a lot of administrative work, and provide a broad perspective of science and other fields of study. Dr. Booze eventually switched back to focusing solely on her own program of research, and of this she said, “At some point you have to choose between wanting to continue your own program of research and administrative roles.” Since I am always interested in life lessons from those who’ve “gone before”, I asked Rose if she had any particularly important piece of advice for students, to which she said “Persistence, you have to be flexible… and you have to be good at managing stress!” Dr. Booze sets an example in this realm by making sure that she stays active through yoga classes, running, and strength training, to keep the pressures of academia at bay. I must note here that she always seems happy and excited about her work, always, and so it seems that she has surely solved this part of the life's puzzle.

Currently Dr. Booze is collaborating with Dr. Mactutus on a grant from the National Institutes of Health (R01) that investigates relations among phytoestrogens and attention. She is also collaborating with faculty throughout the University to understand potential developmental trajectories of obesity by studying MCR4 knock-out mice (and these animals are very impressive, and very expensive transgenic feats of science). She will get to present some data from her work on phytoestrogens in Ireland this summer, and her lab’s recent trip to Puerto Rico is making my next conference in Atlanta seem a little pale!

Dr. Booze can be contacted through the Department of Psychology at the University of South Carolina, and the time that she took to talk with the PGSA is greatly appreciated! http://www.psych.sc.edu/faculty/Rosemarie_Booze